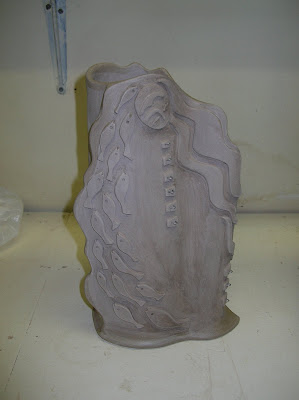 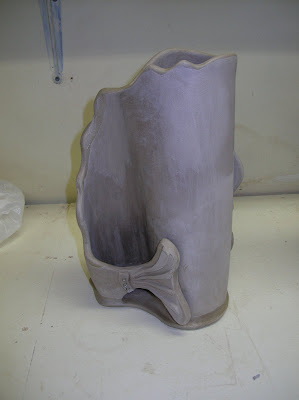 The great thing about the monthly consultations with Steven is that you get to see your pots through another person's eyes. Often we disagree on pots that we like, but after looking at Steven's viewpoint I can see where he is coming from and that indeed his point is very valid.

Well I put in a flurry of handbuilding to get some pieces for feed back from Steven this week. They will all be fired at the end of January.
The first piece of a woman with long hair - it ended up looking rather like the Virgin Mary so turned one side with the hair into fish and then at the back ended it with a fish tail. Added all the Kanthal wire loops down the front as a decorative touch. Not sure that I like that piece. Called it "Devolution". We may have to go back in evolution if we want to continue living on this Planet if James Lovelock's prediction comes true.

However this was the pot that Steven liked the best - felt that it had lots going for it - the fish going up as hair and then the tail going round to the back. His suggestion for to make it just a little bit better - he felt that the back (the area behind the tail as this was part of the woman's body) should have had something there to indicate that it was the back side and now that he has mentioned it, it does seem to be missing something there. 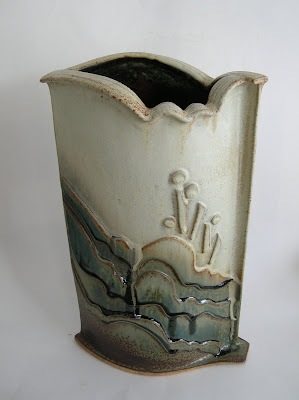 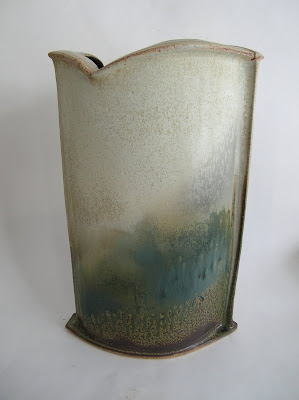 The second pot that Steven liked was the landscape vase - he felt that the contrast in glazes really helped with the decoration, unlike in the fishing lady one - the brown and blue was not a good as the cream/blue (Stony Yellow with .5Fe and topped with Rhodes 32 with .8%Mn. Unfortunately the picture does not show the glaze runs - it's Waterfall Blue on top of Hannah Blue Ash and are really distracting - as they are very shiny and dark versus the rest of the pot which is mostly matt. Steven's suggestion as that I perhaps try sandblasting. My brother is Montreal has a sandblaster and next time I visit I may try that. 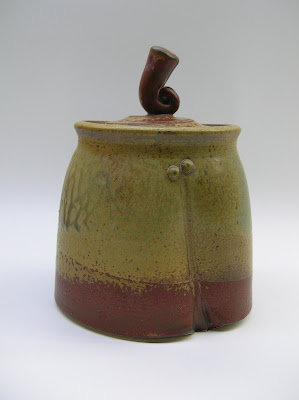 The lidded pot was his next choice - the knob gave it that something extra. I could perhaps add a bit of swirl to the dots on the top front so that they would complement the curled knob. Unfortunately the other side had too much rutile overspray and looked a dull brown and so when I was trying to respray the pot it developed a hairline crack as it was too hot when I resprayed it. It glazed with Hannah ochre ash with Shaner red on the bottom. Well another reject pot for my kids.

We talked about my social commentary pots. I guess the problem is how do you get the person to look at the other side. Also if you start looking in the on the back side then the pot may not in some cases make too much sense. His suggestion for the kid and balloon pot was to show the balloon showing up above the rim from the back as well (perhaps on a wire) so you know there is something there and it makes it look at the back. Will have work on that on the next one. Since the shopping ladies pot was still leather hard, I will cut out a corresponding notch on the back of the pot - hopefully indicating that there is something on the back.

Another great session with lots to think about and work on. 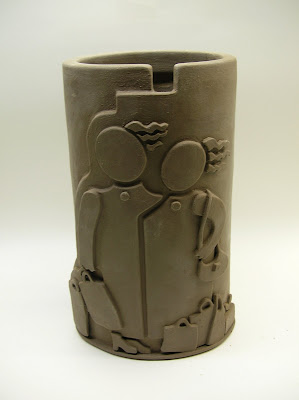 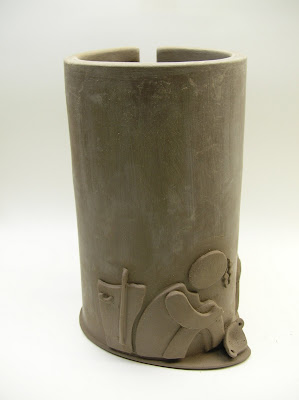 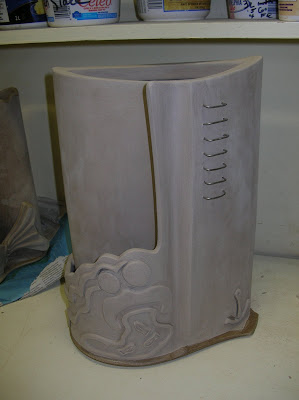 Well the new year is starting with more handbuilding. As my last fishing lady/boat had a serious crack on the rim, I needed to make another one. Unfortunately, even with the old one as a model, the new one does not seem to have the same pleasing proportions. It bulges out too much so distorts the frontal view. As well using 7 ladder rungs instead of 5 seems to add too many and does not look as "right" as just the 5. However it will give me glazing practice.


One of my more successful pieces from the December firing has been the mirror. It didn't warp as much as I thought that it would. So will work on some more mirrors at those should be a more readily saleable item than the fishing lady vases- as everybody asks what are those for? What do you do with them? 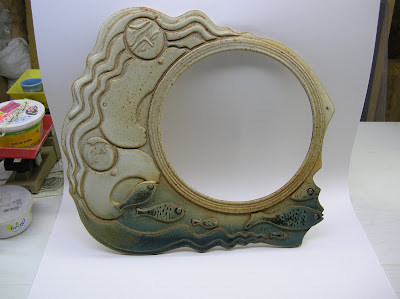 I also decided to do a social commentary one - a child with a balloon on the front and then the back - his companion has shot him/her. My husband's comment was why do you want to show that? Also the shooter does not look evil. 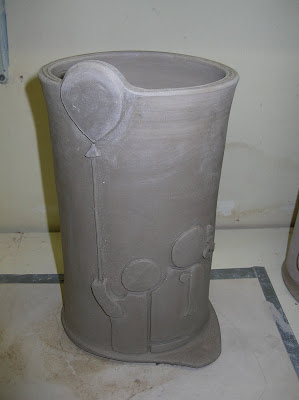 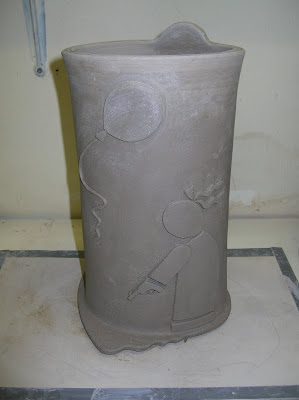 But that is just the point. It is often the ordinary person who ends up committing an act of violence. We hear so often of senseless attacks/murders especially where children are concerned, acts that are impossible to comprehend, the attacker remembered as an ordinary person. So this is my attempt to highlight this issue. Should be fun glazing - I can do some red for the blood.

There is a call for entries for Eastern Ontario craftspeople for a show by the Ontario Crafts Council and am not sure what to enter. In case none of my more recent sculptural forms come out, I am reworking an older piece that consisted of 4 egg cups (one egg cup has an egg in it) on a firebrick. I need to replace the real egg and make a porcelain one. I am also handbuilt a "firebrick" with the words GAIA stamped on the side. 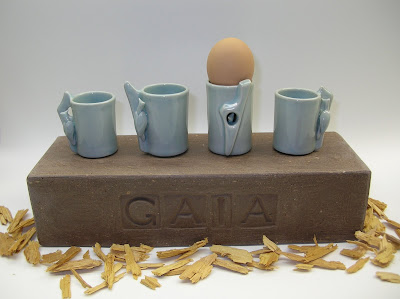 This piece is called "Our Fragile Earth" and represents the interaction of the biological world (the woodpeckers) and our industrialized society(the brick) with the physical environment. The woodpecker chippings refer to the damage that we are doing to our planet (as represented by the one egg - we have only one earth). The words GAIA refers to James Lovelock's theory of GAIA - that the earth is a series of self regulating systems much like a living organism and when one system is damaged or unbalanced it will affect eventually the entire planet. According to Lovelock by the year 2040 the earths regulating systems will be irrevocably damaged resulting in extensive habitat and human destruction. So not sure if people looking at this piece will see all of that.
Posted by Newfoundout Potter at 6:31 PM No comments: