There was a Guild gas firing while I was away in Florida and so came back to some fired pots. The firing was not very good - somehow there was no copper red and the shinos on some tiles turned out totally white just as in oxidation, though other glazes seemed OK.
I did get one reasonable pot out of the 10 or so pots that I had in the firing - a large porcelain platter with stamped fish. 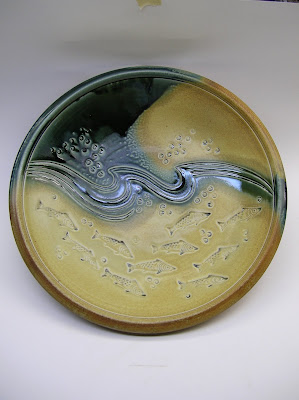 The blue/ green area may be a bit strong, but still not too bad. It would have been nice to have blue ash rivulets in that area instead of a solid wall of blue green. Water Blue is very fluid and a little goes a long way.
I used Steven's suggestion of using water blue on the stamped area, rubbing it off and then glazing over with the stony yellow - this accentuated the stamps very nicely. I was a bit worried about using a very fluid glaze under a stiff one as I might get bubbles but it worked beautifully. Thanks Steven! 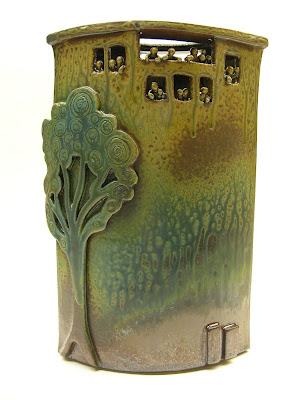 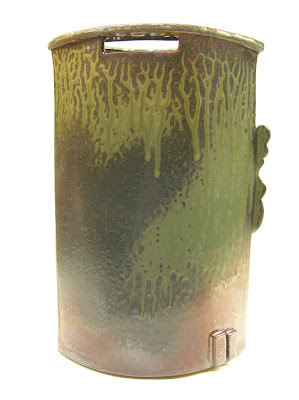 At tall "Parade" vase finally made it into the refire - turned out better glaze wise, as the blue and green areas turned out less black after reglazing. However the whole form is not very good too narrow if you look sideways and the top window cutouts look weak. I must remember not to focus so much on the decoration, but on the form as well.
I may try another one - with a better tree and the windows integrated better. 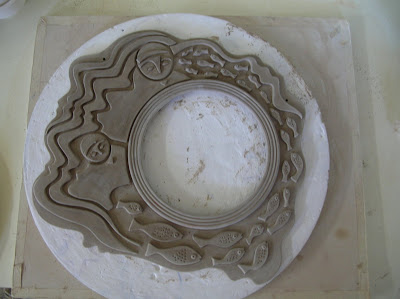 I also finished another mirror - this time using the fish hair - but it may have ended up too complicated. I again dried it very slowly and this time used a heavy bat on the mirror frame as that is where I got some warping last time in the firing.
Posted by Newfoundout Potter at 9:49 AM No comments: 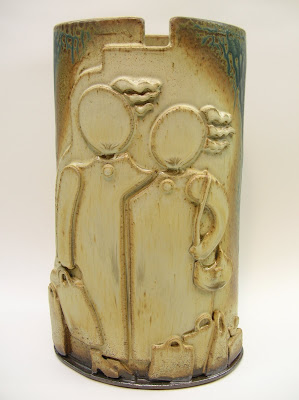 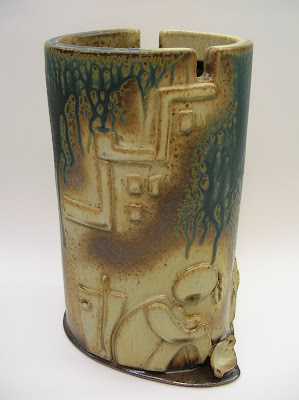 The end of the week was spent photographing some pots that I planned to enter in the Eastern Ontario juried craft show - Masterworks East. I decided to enter the social commentary pots - the shopping ladies and the balloon pot. The glazes turned out pretty well on those.

The glaze runs on the chins, give the shopping ladies a self righteous expression that works well with the theme. I called it "Only 265 Shopping Days Left". I was going to call it, "And I encourage everyone to go shopping more", Dec 20 2006,- George W. Bush. But as this was a Canadian show I felt using an American quote was not appropriate.

I did not enter the balloon pot with the wire as I was having trouble adding the wire. Not sure quite how I will do that. I used the other one that had the balloon string done with clay. I called it "Why?". I was going to call it, "So long as governments set the example of killing their enemies, private citizens will occasionally kill theirs." - Elbert Hubbard, but again it was an American quote. 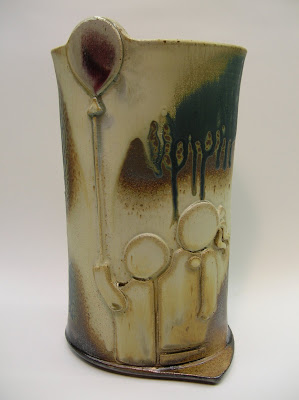 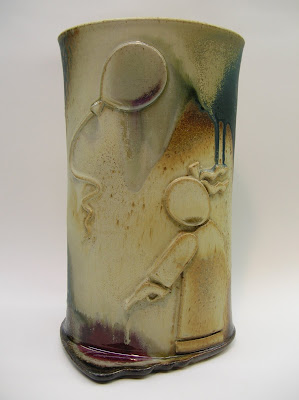 In the balloon pot, I managed to get enough copper red on the balloon, and on the blood area. As well the ash glazes ran enough to give the effect of trees - both sides ended similar so that you are left with the impression the action on both sides takes place in the same place. Both of these were made with Tuckers Sandstone instead of Prostone. It seems to be a bit lighter in colour and so gives a whiter effect that I prefer with the stony yellow.

I think several of my other pots may have been better - like the mirror - but it would have been hard to photograph and I was not sure how to finish the back. One of my pre-Steven pots "Ladies Who Lunch" was a possible as well, but then after looking at how they were glazed with just one colour - it looked just too bland. I can see Steven's point that you can go more with glazes on my pots. 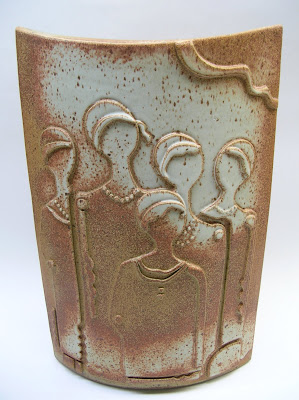 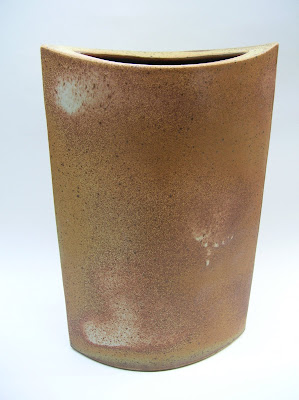 Along with digital photos I had to submit a bio, CV and artist's statement. I had never done that before so it was a bit of a struggle to write that.

I will find out at the end of February if I had my pieces accepted. I heard that they had about 80 entries - so lots of competition but maybe not as much as in other shows.

I did not get much else done in February as we had to visit my father-in-law in Florida and did not get back until the 20th.
Posted by Newfoundout Potter at 9:49 PM 1 comment:

Well I am falling behind in my blog - about a month behind - so will try to remember what was happening.
I tried to work on Steven's suggestion for my balloon pots - to try to get the viewer to realize that there is another side to the story pictured on the front. I made another one and added another balloon protruding at the top at the back, hoping that this will entice the viewer to look at the back. I couldn't really use a wire to hold up the balloon but will add the wire once the pot is fired. I was also able to add a notch on the back side to guide the viewer to that side on the shopping ladies pot.

The rest of the week was spent glazing - it's always so time consuming. I also did a whole series of test tiles - with the stony yellow, Hannah ash glaes and other - with lots of overlapping glaze tests.

Our January gas firing came out on Thursday and I feel that finally I had passable results with the stony yellows/Hannah ash glazes and water blue. I find that the stoneware clays need only .5% iron in the stony yellow to get good colour and up to 2.5% for porcelain. Also on stoneware using a white slip under the yellow also gives it a whiter/yellow look that I am aiming for rather than golden hue. Too much Hannah ochre ash also gives you a browner, golden hue. 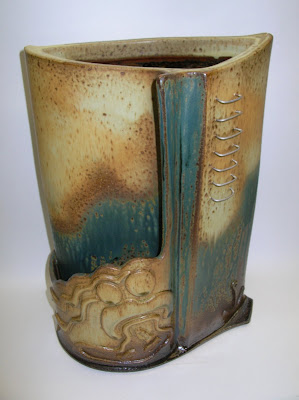 The fishing boat ended up looking almost the same as the first one from the December firing. Unfortunately it cracked again on the upper right corner. I may have to try some paper clay on those large handbuilding projects to prevent cracking. 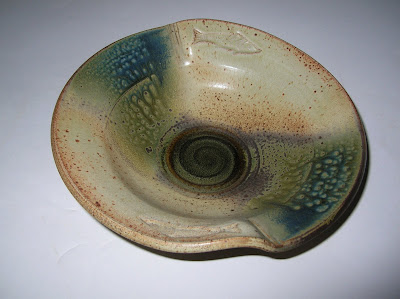 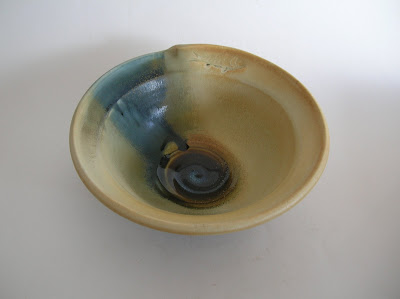 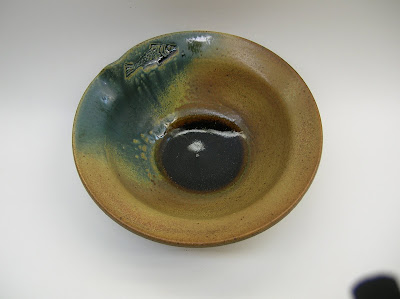 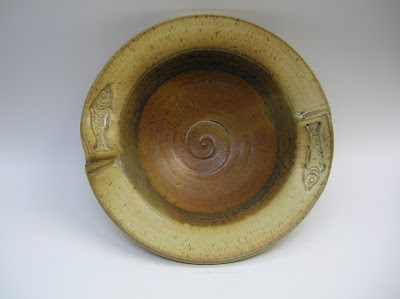 The bowls with the stamped fish on the rim - I have not been very happy with them This time I had used the blue on the fish - so that the stamp and blue colour were all in the same area - otherwise the fish and the blue area competed for attention. However after looking at all those bowls from various firings it seems that the one with just one colour on the rim were the best - the stamp was enough. Sometimes less is more! 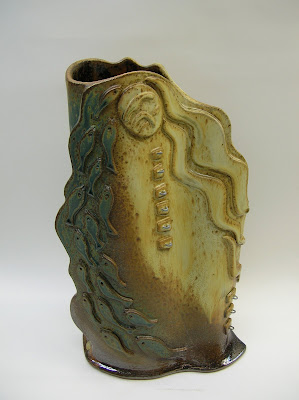 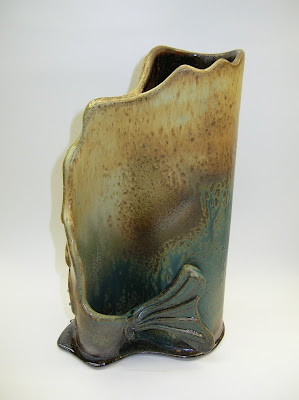 The Devolution pot - the lady with the fish hair - turned out not too bad, but unfortunately again has small cracks at the bottom front - may not be large enough to affect it as you have to look closely to see them and they are just surface cracks where I added a bit of clay to the foot.
Posted by Newfoundout Potter at 8:09 PM No comments: