From feedback from the Novmber meeting I tried working on expanding my vase forms to make them more interesting. I was going to make a three part vase - with interlocking and matching sides - and carry out the forest theme from our farm - the virgin forest, the clearing of the land and then the return to the forest.  I did not have a clear picture in my head and the vases did not fit together that well, so ended up making three pots with three separate designs.

One was just the forest trees as I have done before, so I did not bring it to the meeting as I could not really come up with anything new there, but I persevered working on it as sometimes new ideas come up when doing repeats.
The second ended up as bass players as the evening before I had attended the Messiah played by the Deep River Symphony Orchestra and the Choral Group. There were three bass players and the way they played  and stood with their instruments really made for an interesting composition. I ended quite liking that as the pot also flowed with the figures. I left that at home as well as it did not seem to fit into my themes. 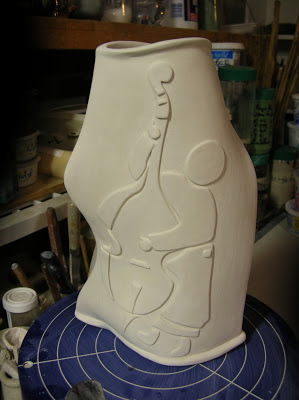 The last pot with a side panel I had a lot of trouble deciding what to do with and at first I made several holes that went all the way through, but ended up filling them in again. Eventually I ended up with a face of a woman, with a nose stud and earring as I felt it needed to add something a bit more interesting. Besides I like gimmicks.
I called it homage to Keith as he wears an earring. The suggestion was that I glaze it all in white so that it looks like it was carved out of stone. It would not be a colour that i would have chosen but we'll see. So this 3 part project did not turn out as I had originally expected - but that is what makes working with clay so much fun.
Posted by Newfoundout Potter at 7:40 PM No comments:

Well I am well behind in my posts, so I'm playing catch up again.
The January meeting was almost two months after our last meeting in November and with Christmas in between there was not as much time to make work as I had expected. I braved the snowy Saturday morning weather again - with my husband driving this time - to North Bay on snow packed roads but made it on time for the start of the meeting.
With my nuclear theme, I had lots of problems trying to get some sort of clear printed words on the pots. For the teapot I used stick-on stencil letters, waxed  around them, removed the letters and then brushed on black underglaze. It worked very well.

The trouble is I was not able to find small stick-on letters for the cups, so tried the gum arabic, stain/linseed oil method as described in Ceramic Arts Daily but my cups were too dry to get a good transfer - they need be a soft leather hard. So I just ended up writing on the cups with an underglaze squeeze bottle and thin metal tip - not what I really wanted. I glazed them with a clear glaze - and as the set was made of B-mix - it ended up gray - having picked up the iron from the body - which I liked . I wanted it to look industrial. - a safe every day process. Because the teapot did not match the cooling tower cups I decided to make another teapot - this time in the shape of a cooling tower, with a steam cloud for the knob, but did not get a chance to glaze that one for the meeting.


The fuel bundle trivet I glazed in a commercial glaze - Amaco bronze - and it was quite effective as a metallic looking glaze and suited the fuel bundle end section.. However as it was too time consuming to make as a multiple copy unless slipcast it, but I would have to do it in at least two parts. So I drew and xeroxed the pattern and transferred it to the trivets - a faster method though not as effective.visually.
I will need to work some more to see what I can come up with regarding the CANDU reactor as it does not have cooling towers, but a containment building and so the cooling towers representing nuclear energy does not resonate with the Canadian public.

I glazed the three sopranos with my usually stoney yellow, Hannah blue ash and some watercolour green. The blue ended up too stark so I reglazed with some stoney white at cone 6 slow cool electric which toned it down but the colours are all a bit muddy. I keep forgetting that the Bax is not the best for these colours as the glaze does pick up some iron from the clay. I need to use a porcelain or remember to spray with a white slip first. I really like the B-mix for handbuilding - it is really easy to fix seams or add stuff even if things get too hard.
For the Bottom Billion I ended up glazing the pot with my usually Dan Hill blue lithium slip, MD shino and temmoku. The glaze ended up really nice - a bit of golden lustre - as the shino sometimes get, but the hands, with some rutile overglaze did not show up well - look more like a tree. The oil slick is in temmoku with some rutile overglaze spray.
I had made another one on that theme - with a narrower base, a book for the top, hands reaching up again and a tap handle. Again there was just too much info and all the messages got overloaded,plus the hands again did not look like hands but sea anemones.  I've also been lax in taking photos so do not have a pictures of the Bottom Billion pots from that meeting.


Posted by Newfoundout Potter at 10:14 PM No comments: