I have been getting ready to do another wood firing and so was looking at some of the pots that I had kept around from my first firing. One of them was a cup - it was not the glaze that caught my interest this time but the form of the cup itself.  I had made it in 2007. I took some pictures to compare some of my current cups to that 2007 one which is pictured first below. 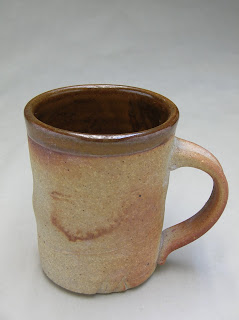 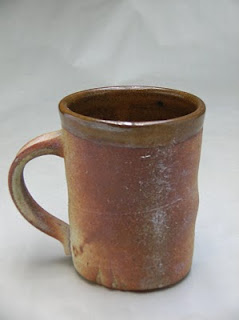 I remembered what Steven Hill during the journey workshop had told me about cups- the lips and foot are like punctuation marks and should balance. That wood fired cup - definitely no pucntuation on the foot! As well the handle was not pulled on the cup and was rather thick all the way from top to bottom - no sign of a taper to give it some elegance. Now I have been pulling all my handles off the cup - maybe not always successfully but I feel that they are getting better. 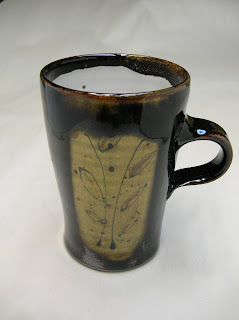 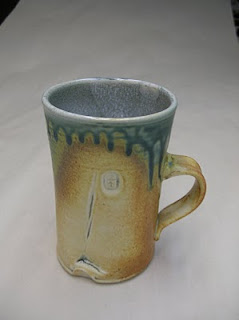 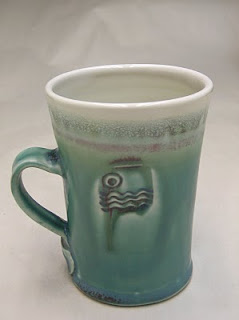 One Plus One Equals Three

The Fusion  Conference (the Ontario clay and glass conference) was the last weekend in May and it a was great to meet with other like minded people in Ottawa. The two presenters were Joan Bruneau from Nova Scotia   and Sam Chung from the US. I liked Sam's work much better and so found his presentation much more useful.. 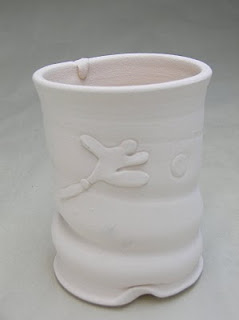 I took two pre-conference workshops - both were with Tom Lambert. One was on how to throw large pots which was kind of a review of Tony Clennel's workshop at MISSA last summer. However it was the second one called "Making Marks" that I found most useful. He demoed his method of spiral distortion, use of thick slips a la Steven Hill, and faceting.  As this was a hands on workshop we were able to practice. I especially wanted to improve the spontaneity of the spiral distortion. However after looking at all the spiral pots I realized that I wanted to add something different as it seems so many people have jumped on this band wagon.. 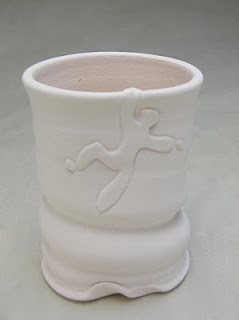 Last summer at Missa I took the weekend handbuilding workshop with Dennis Meiners. He made little sprigs that he would then throw on slabs prior to using them for handbuilding. By throwing the sprigs he was able to get them to stretch a bit and give more spontaneity to the design. His method has been percolating at the back of my mind for a long time now. What I liked was that his sprigs were very thin and the effect was not at all stiff and formal. Instead of using a sprig, I rolled out clay very thinly and then cut out the figure of a person. Then I threw them at the pots. This is harder than it looks and I missed about 75% of the time and about 25% of the time it landed in an inappropriate place. Since the pot was just freshly thrown, the sprig would indent the pots as well as stretch, resulting in a very spontaneous effect. On the negative side it was impossible to remove the sprig if you wanted to without damaging the pot..
Twice the figures ended up absolutely fantastic. One had the legs stretch out and looked like a soccer player and so I added a ball to the figure. The other one was even better and the figure ended up near the rim of the pot and his arm gripped over the rim so it looked like he was trying to climb into the pot. I ended up cleaning the figures up a bit with a ball tip tool to emphasize the relief and added little bits here and there as with the angel tumbler. I've since tried this method some more, but my chance of hitting the pot in the right place is about nil so have put that back on the burner until I have a bit more time as I feel this has great potential. 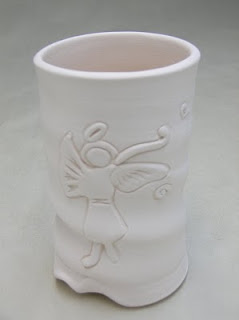 It's always great when what you have learned in separate workshops comes together and clicks  - resulting in something that you had not expected, something greater than the individual methods.

Now how to glaze the two that I have?
Posted by Newfoundout Potter at 9:38 PM No comments: