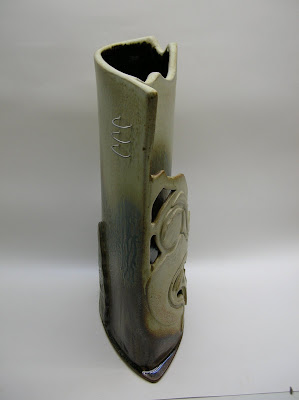 The end of the journey workshop at Center Street Clay is on Oct 22-24. Probably just three more gas firings as summer visitors will take up some time in August so I really do not have too much time left. Steven suggested that for the gallery show I have 3 to 4 large pieces either slab or thrown and then several smaller items - again thrown or handbuilt. 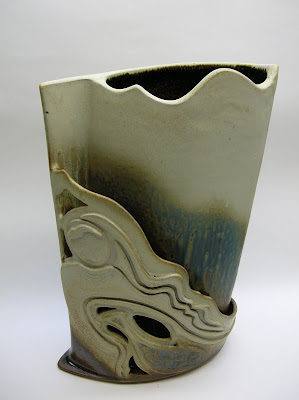 I think that I need to take more pictures from more angles for my handbuilt pots as from some angles the form is not at all attractive, but it is hard for Steven to comment on that as he has no way of seeing it - though Steven said that apart from a definite front and back there will always be one view that is not as good as some of the others.

It is strange how completely my views have changed on decorating pots. Pre-Steven I only decorated one side - after all you cannot see all sides at once. Now I find that I just have to do the decorating on the back as well, in fact I enjoy coming up with something different but still meaningful for the back. 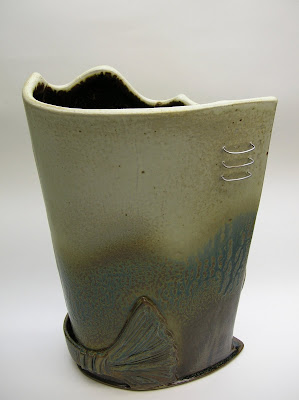 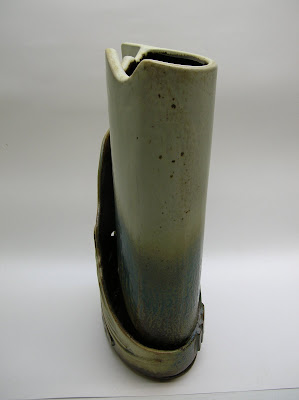 After all the talk on Clayart about form over decoration, I wanted Steven's view. It all depends on who you are - whether you focus first on form or on decoration, but in the end you still need to look at form and both have to work together.
I definitely know that I focus on decoration as I don't think that I have ever made an undecorated pot.

We talked about the last two slab pots that I had made - one where I had taken all the best features from each of my previous pots and attempted to make "super" pot. I had also combined shellac resist on the applique work so that it would tie in with the resist work on the plates and casseroles. Somehow i just cannot make applique work look right on plates, bowls and cups. Steven says that it is a matter of scale mostly. The appliques ends up overwhelming the pot.

I have had trouble with cracking rims - where I had added clay strips to the top edges to give the pot a more substantial look. The last two times instead of cutting leatherhard strips and adding them, I rolled a clay coil and applied it quite wet to the leatherhard clay top and voila - no cracking but it is hard to make the rim thickness even! 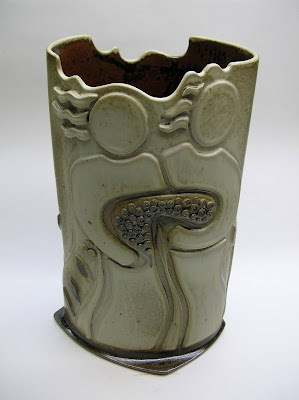 Steven suggested another method, rolling down the rim with a small clay roller. He used to do that on slab platters that he used to make. This compresses the clay as well as thickens the rim so it no longer susceptible to cracking. You can also use the edge of the roller to make a line along the rim, or perhaps on the appliques. 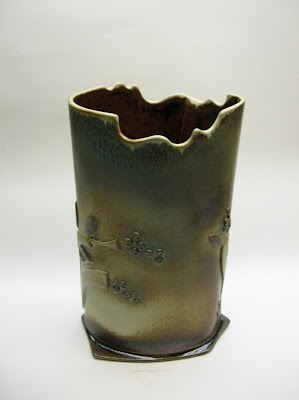 This sounds like a very interesting technique that I will have to try as the vase with the two ladies I had left the rim unthickened and it definitely did not look very good. As Steven said the base of the vase is quite substantial with the flaring at the bottom, but the top just is very weak. Another suggestion was to use an extruded rim like I had done on one of the vases - and perhaps not even having it all around the top but just on some sections. That sounded like it had lot sod different possibilities - maybe to accentuate a wavy pot.

One of the other journey participants had been to Centre Street Clay to take one of Steven's electric glaze firing workshops. That is something that I want to take as well. Steven has been getting amazing results in electric. Maybe I can persuade the guild in Ottawa to invite him to give a workshop. Will have to work on that.
Posted by Newfoundout Potter at 2:57 PM No comments: 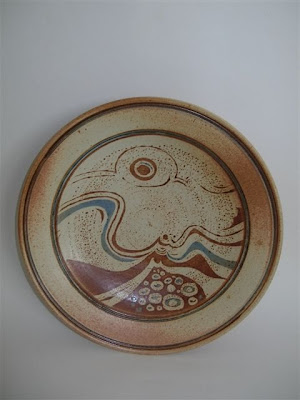 Well in one of my posts to Clayart I mentioned all the different techniques that I use, include "batik type resist with underglazes". A clayarter asked me to elaborate so I have included two pictures of 2 plates done a couple of years ago in that method and a brief explanation. They were done in oxidation fired to cone 7 1/2 and sprayed with Stoney White over non-commercial brown and blue underglazes. There is also a bit of overspray with rutile/gerstley borate and rutile/gerstley borate/red iron to give beige and darker beige highlights.

I refer to it as "batik" because you do it backwards as you would batik. First I wax all the areas where I do not want underglaze which is usually most of the pot. Then on the wheel I brush on the first base underglaze. Doing it on the wheel gives you an even coat. You also get little beads of underglaze on the waxed areas that add to the design. The beads kind of are reminiscent of the crackle lines that you get in batik.

I usually use a brown iron underglaze first. Then I wax the areas that I want to keep brown. So then I brush on the blue underglaze. If I wanted a third colour like green, I would wax out the areas that I want to stay blue and then brush on the green etc. I usually just use brown and blue. Now you have to rebisque to burn off the wax. So it is more time consuming but it gives a totally different effect than drawing directly. Try it and you will see what I mean.

I use this technique as I do not have very good drawing skills. I could let's say draw a flower in blue and brown underglaze but it would end up amateurish. By using the "batik" method I draw around the outline of the flower, the leaves, the petals, the stem and somehow that gives a very different effect and takes away some of the need to have good drawing skills - it adds a bit of naivety and simplicity. Not sure if that makes sense. In the 70's and 80's I guess that was my style, trying for a reduction look in electric. As I now have use of a gas kiln I no longer use this as much, though I am trying to find a glaze for cone 10 redux that would work with underglazes like the Stoney White.
Posted by Newfoundout Potter at 6:34 PM 1 comment:

June 7-14 Contemporary is even harder! 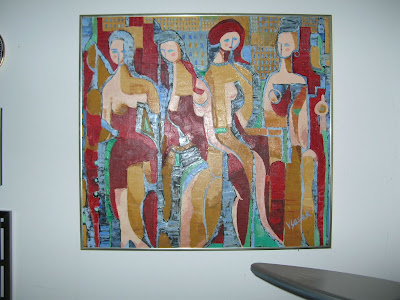 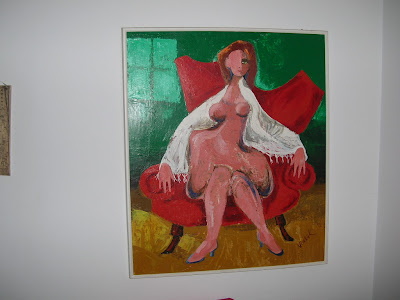 One of Steven's comments about one of my pots was that the reason that he liked a particular pot better than another one was that the woman applique was more contemporary. It got me thinking - my influence was my mother as she is an artist and she loved to draw figures. Her favorite painters are Picasso and Gustav Klimt. Here are two of my favorite paintings that she did many years ago. After the 1970's she rarely painted any more as she had to look after my father who had had a stroke and so perhaps her figure style was somewhat dated, though I don' really think so. Sadly now close to 90 she no longer has the energy to paint.

I was determined with this last vase to make the appliqued figures more contemporary - perhaps with torn or unfinished edges - to give it a more abstract look. However it ended up even worse - over designed, too cutsy. In making these pots, I find that often even though I hate what I am making I find that I cannot help myself and cannot move away from the direction that I am heading. 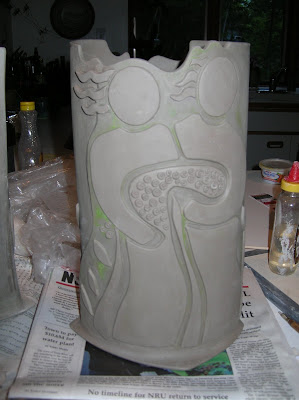 The rim also has way too much stuff. I was not too satisfied with the wavy top and so decided to cut some out on the back - that was mistake! This is the first vase where I have not thickened the rim by adding extra clay strips. The thin rim just does not do much for the pot - just a bit too delicate.

Whenever I added leatherhard pieces to the rim, usually I got some cracking at the joint. So for the last two pieces I tried something new. I rolled out a coil and added it fresh to the rim. So far, the first pot - no cracks and next one comes out next week and we'll see!
Otherwise I'll have to start using paperclay. 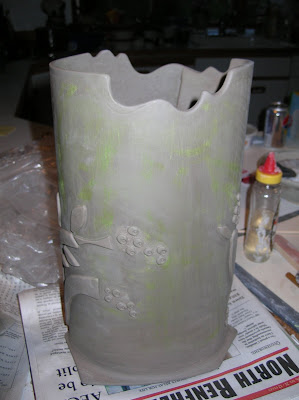 So I have ended up with a vase with two women - I tried to make them look like they have berries. My mother years ago had painted a picture of women picking blueberries and so I thought I would maybe reference that. Sort of blueberry bushes at the sides and back. However it looks like a wedding instead.

Actually I may be contemporary in a social sense - a pot with two woman getting married!
Posted by Newfoundout Potter at 9:00 PM 2 comments:

June 1 - 6 Trying to Pull It All Together 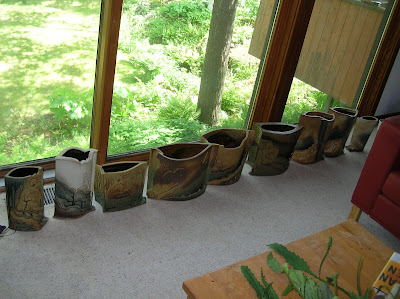 Well I have lined up along the living room window all the handbuilt pieces that I have made so far in my "journey" - landscape vases, fishing lady and fishing boat vases. I now have a flotilla! I tried to pick out what I liked best from each piece and then make an ulimate piece incorporating all these best features. 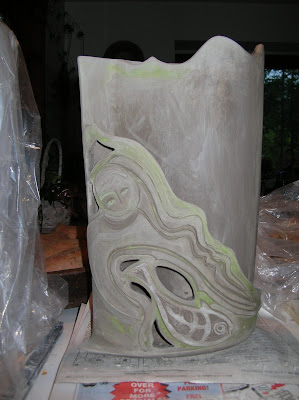 I decided to incorporate the following:
1. the tall shape was better than the longer boat shaped ones.
2. the kanthal wire "ladder rungs'.
3. a wavy top
4. some foreground slab for a 3-D effect
5. the figure has a fish tail
6. some cutouts in the foreground slab
7. simplified fish - one large fish as opposed to lots of little ones
8. wavy hair
9. When I glaze use the lighter pale yellow colour rather than the beige as it contrasts better with the blue. 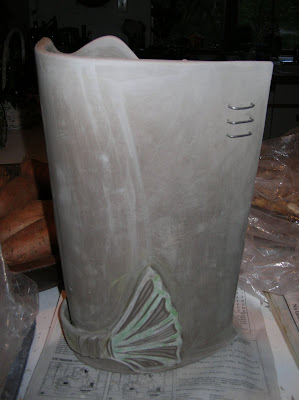 After all this I am not sure if I really like it. I had used shellac resist and carving to make some of the pattern on the large fish and on the tail. It is the first time that I used this with the appliqued work and I find that I like it. However not sure that I like the whole piece - and after I thought I should have ended the tail not as a tail but as a large fish head as I had in another one of my pieces. It would have made for a more original and surprising picture on the back side.
Posted by Newfoundout Potter at 4:05 PM No comments: