Well I cancelled my critique session with Steven this month as my husband was supposed to have hip replacement surgery last Friday. In the end the surgery was cancelled at the last minute because of lack of beds. With all our plans turned topsy turvy I was not able to refocus on pots and sort of fritted away the week with nothing accomplished. I should have re-scheduled with Steven as he suggested, but just did not have the energy to get my thoughts together, but now wished that I had as it would have helped to get my act together. Definitely stress has in impact on my creativity and focus - I really don't know how artists that are undergoing major life crisis manage, as a minor thing as hip replacement for my husband has such an effect on me. 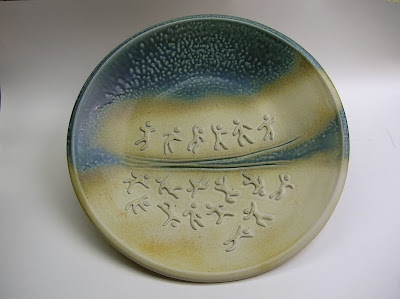 We did do another gas firing with some good (but not excellent) and some so so results. I finally figured out how to adjust the spray gun to get just a very light spray (it's just taken me a year to figure that out!) and that has helped to stop all the drastic running with the Water Blue/Green. I just need a very light overspray with that glaze to get things moving.
I like how just a light coat of stoney yellow with .5% Fe looks with a slightly thicker coating of Hannah Ochre - nice light yellow to rich orange tones. My plate with appliqued figures turned out well, expect that it slumped. I am having problems with plates that I have thrown on hydrobats. Somehow I end up with the foot too small so it does not support the sides enough. Together with uneven drying of these 16" plates I end up with slumping on one side. Now that the warm weather has arrived and the furnace is no longer blowing hot air that should not be so much of a problem. Plus a lot of the figures had cracks - I had applied them to the plate after I had trimmed it and it was getting too dry. I think I will try several more of those and see if I can do a better job. 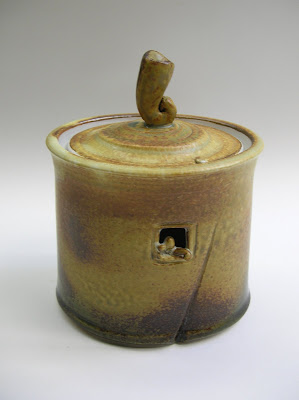 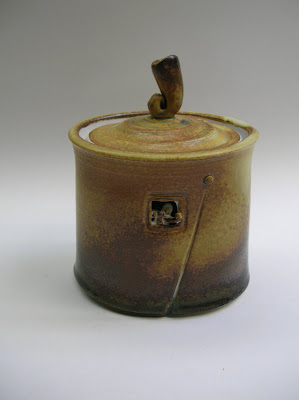 I made the mistake of using Leach White for the interiors of my garlic pots instead of a Temmoku and the white is just too glaring inside and also shows around the figures and seems to clash somehow with the rest of the glaze. Plus there is tiny surface crack in the bottom of one where I whacked one of the pots - you wouldn't have even noticed it with a Temmoku glaze but it is very noticeable with the white. The crack has no effect on the function as it would not leak, is not even a mm deep so is purely cosmetic. The garlic pots were glazed at the end of a long glazing session and I did not take as much care as I should have and it showed. Also the lids ended up a tad small with too much of the unglazed gallery showing. 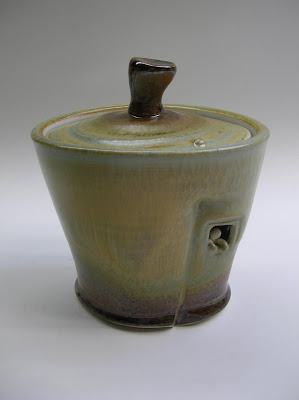 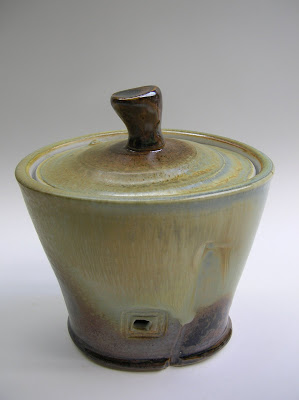 I tired a new glaze - Caramel - which seems to look good with Hannah Ochre on top - it's smoother to the touch and runs more. The garlic pot with it was the best of the lot. Also I used Alberta Rust for the dark brown on some of the bottoms and I think that i like that better than temmoku as it's not so shiny and my spray both mix which is very dark brown but does not give a good colour with Hannah Ochre over it.


Well I have a couple of stress free weeks until my husband's May 11th rescheduled surgery so I had better make the most of it.
Posted by Newfoundout Potter at 8:14 PM