"The next day we set off to explore, using the buddy system for safety.  Several of us set up at Grande Chute while others canoed further down Robinson Lake to the next set of rapids. The river trail along the Chute is rough, and has spectacular rock falls with some boulders the size of small houses.  One could only imagine what the people travelling in this area felt thousands of years ago. Like us they must have been in awe of the power of the water and like us they also feared the churning rapids – and one could only wonder how many travellers have been swept away by the swirling currents. 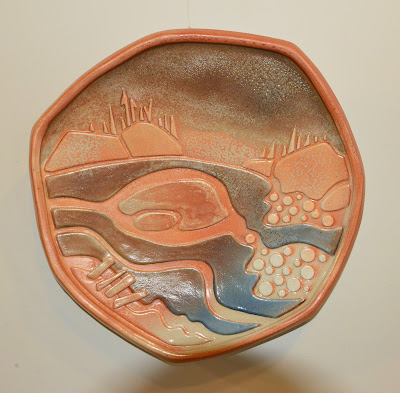 
In the evening we sat around the campfire and traded stories of canoe trips and art experiences.  We also discussed Wally Schaber’s book on the Dumoine, “The Last of the Wild Rivers” and how important the River was to First Nations people as a north/south highway.
The Indian Point Pot
I had brought clay for everyone to make a pot the way the aboriginal people made them here thousands of years ago as evidenced by the “Indian Point Pot”. Radiocarbon dated at 2500 years BP (before present), it was excavated during an archaeological dig at Indian Point across from Deep River in the early 1950’s and is now on display at the Museum of Civilization in Ottawa. One evening we sat around the fire, surrounded by the dark forest and silence, channeling spirits from the past. We coiled the clay into a beehive shape that was then turned over and pinched, paddled and scraped into a thin open vase. It could have been an evening thousands of years ago, our hands repeating the same motions made millennia ago and resulting in pots very similar to the Indian Point Pot – with a flared lip and a rounded bottom to better withstand the thermal shock of cooking over open fires. 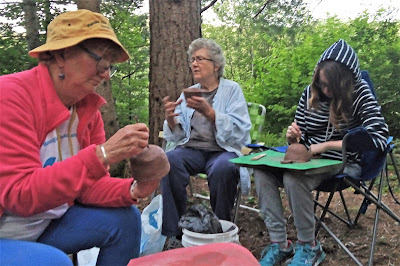 Eva Gallagher (center) demonstrates how  First Nations first made pottery in this area thousands of years ago. Photo credit Scott Haig 2017.
I came back from the camp energized, ready to continue working on several pieces that I had started at the camp. In October CPAWS hosted a very successful gala and silent auction of the donated art in Gatineau at “The Moore Farm”, a National Capitol Region restored post and beam barn that is open to hosting various events. With featured guests, singer/songwriter Ian Tamblyn, artist/environmentalist Robert Bateman, the event raised over $11,000 for the Dumoine River project."
The idea of an art camp - that idea of bringing together artists to work on a common theme are becoming more popular and I highly recommentd this type of experience . Hopefully CPAWS is going to offer another Dumoine Art Camp in August 2019 so in interested look to apply early in the spring.of 2019.
Posted by Newfoundout Potter at 10:09 PM