Well it was a mad rush last week and this week to get stuff bisqued and glazed for the Dec gas firing on the 17th. I also needed to get all my pics posted on Flicker for the Thursday consult with Steven. From the Nov firing, the one with the muddy results, Steven agreed that they could have been a result of the accidental reduction during the slow cool.

We discussed the handbuilt sculptures. Steven felt that I needed to concentrate more on my spraying - I was delineating the different areas too much - you can see the the dark brown bands on the back of the boat/fishing woman sculpture where the different glazes separate and he felt this was a distraction. At first I rather liked them, but now in terms of total design I can see where he is coming from. He mentioned that he feels that it should not be too obvious that a pot has been sprayed - the areas should blend together.

Our Guild sprayer does not work that well - it tends to get clogged and the control is not that good. Steven orders his sprayers from Harbour Freight in the US and I got the item numbers from him. I will order the small one as that will work with our small compressor.

My last boat/fishing woman sculpture was still in the greenware state - I was really pleased with it as I felt that I had finally improved by simplifying - as well I was designing with the glaze in mind. In my previous vases the runny ash glazes were interfering with the appliqued design, yet I loved the effect of the rivulets. So this time I left large blank areas and kept the appliques to a small area in the forefront. To add some interest to the front blank areas I added a Kanthal wire ladder. Steven liked the Kanthal wire addition, as it fitted the design. As well when one looked down from the top the resulting wave shape also fitted in with the boat theme. I still felt the top edge when looking at it from the front was a little wishy washy - it was supposed to be scooped out front and back and swoop up in the front middle protrusion. I think that a stronger projection in the middle and on the right as well would have helped. 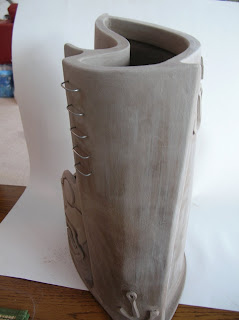 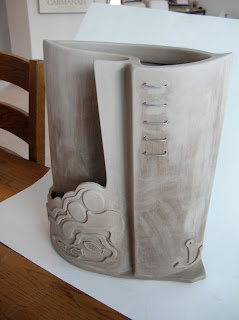 We discussed the anchor. I have put an anchor on all the sculptures to indicate that it is a boat. However I have to agree with Steven they were just too obvious and to me, just too angular. The rest of the design is more curvy. Now when I look back at all the other sculptures, the anchors just scream out at me. Next sculpture no anchor!!!

I had included Kanthal wire as a knob in a teapot. Steven asked me what I thought of the wire knob. I felt that it was not substantial enough and perhaps spiked up too much in relation to the rest of the pot. Steven felt that although it was a novel idea it was too out of place on that pot - in relation to the handle etc. He felt that if you use that type of wire knob you need to add more of it somewhere. The Kanthal wire worked on the sculpture because of the repetition. 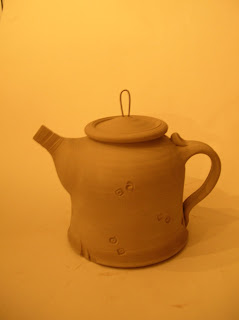 After thinking about it for a few days, I now am excited about the possibilities of more wire additions on a teapot such as on the handle and under the spout - ala a nose ring like Tony Clennel has on his gravy boats. 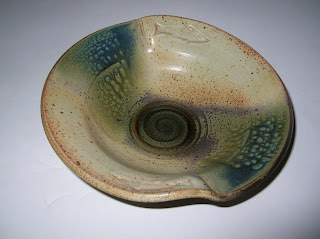 One of the big advantages of being able to discuss your work with an experienced teacher such as Steven is that you end up seeing so much more than you had before, even if it was something that Steven had not pointed out. These discussions also generate a lot of new ideas over the next few days as I mull over his comments.

The glaze results will be out this Saturday - I had decided to concentrate on the Stony Yellow, Hannah Ochre and Blue Ash Glazes, using the Waterfall Blue and Fraser Titanium overglazes which create crystals and movement. So lots of pots in that combination - let's hope they turn out.
Posted by Newfoundout Potter at 9:37 PM