Again I am way behind in my blogging so here's my effort to catch up by reprinting an article that I wrote about the Dumoine River Art Camp last August 2017. - my first art camp experience! The Dumoine River is a famous canoeing river that joins the Ottawa River about 20 miles west of Deep River. My article was first printed in our local paper the North Renfrew Times last year.

"Mention the Dumoine River and it conjures up scenes of rapids, lakes, canoe paddles and portages. But art? Not so much! But that is what The Canadian Parks and Wilderness Society – Ottawa Chapter (CPAWS-OV) was offering to artists last August – an Art Camp on the Dumoine. There was  one this year as well! 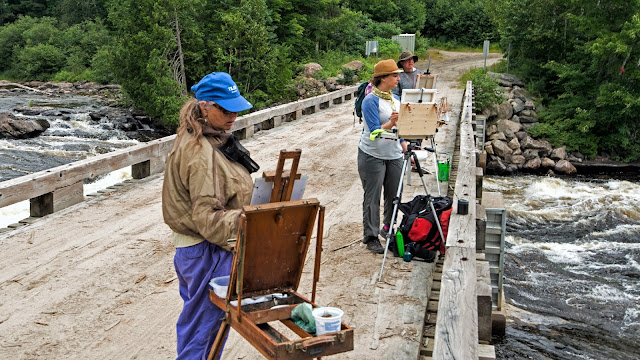 
It is all part of CPAWS-OV effort to raise funds to preserve the Dumoine River as a protected wilderness river for future generations. As they state on their website, “it is the last un-dammed Quebec tributary of the Ottawa River and one of only a few rivers in central Canada free of dams.”
In return for offering free tent accommodation and meals (CPAWS staff turned out to be excellent cooks!), the artist would get to stay for up to 6 days at the camp. They would then donate a work of art, inspired by their stay, for a silent auction at a gala in Ottawa in October. Here was an chance to meet other creative people in a unique environment. Always open to new artistic opportunities I applied as the life of an artist is not a destination but a journey.
We were to camp at Lake Robinson, that widening of the Dumoine River just below Grande Chute. To minimize parking, we met up in Swisha to carpool to the Lake. Kids leaving for their first summer camp couldn’t have been more excited than our group! It was a challenge to load all our sleeping bags and mats, folding chairs, boxes and suitcases of art supplies, easels, cameras, and tripods, including my box of clay and tools into the few cars that would be driving up the rough road.
Although it has been many years since I have been up the Dumoine, I still remember that first drive over 50 years ago – up along the rough road past the old Bonanza Inn and the long-closed downhill ski hill and tow on the hill opposite. It was always an adventure there to drive into the unknown, but one always had to be wary of meeting a fully loaded lumber truck that might come around the corner. One year we even skied to Grand Chute after driving part of the way.

The fifteen artists who attended were a pretty diverse group, not only in age, spanning six decades – but also in artistic media. There were several photographers, a glass artist, botanical illustrators, acrylic and watercolour artists, both realistic and abstract and of course potters. We came from as far away as North Bay, Vankleek Hill, Ottawa, Pembroke, Shawville and southern Ontario. There were two of us from Deep River, photographer Bruce Winterbon and myself.
As part of our orientation, one of the CPAWS staff – conservation biologist Elena Kreuzberg took us on a nature tour. The Dumoine watershed is huge, covering 4400 km2 with some of the last remaining stands of old-growth forest in eastern North America. The area is also important as a connection between Algonquin and La Vérendryer Parks, acting as a corridor for animals moving further north from southern areas. This will be even more important as the climate continues to get warmer."
Posted by Newfoundout Potter at 9:36 PM