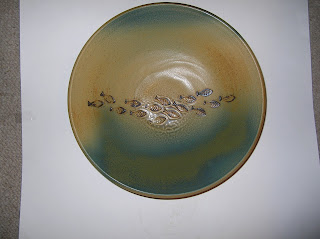 The weeks go by so fast - and so few pots made, but having a deadline is really helping. Had a great feedback session with Steven on Monday. Steven's comments on the fish plate - could have done better - fish going through the middle, need more asymmetry etc. I thought that I had created asymmetry by varying the location of the fish - but never looked to see that they go right across the middle. The glaze was definitely too thin- looked sprayed. May try to reglaze. 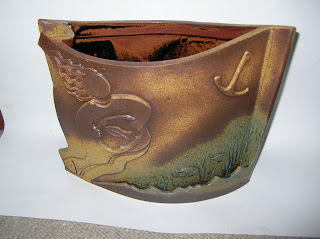 The fishing lady was definitely much better, but still need to control my spraying better, the lower part of the woman is a totally different colour so disruptive to the esign. So will try to keep better notes - how many layers, how thick is the glaze in the jar etc.
The pots that Steven liked the best were the small oval dishes. I had thrown them very fast as I needed some small items for the Cooperative. It was the thickness of the rims, that the foot match the rim as well in definition. He said they looked generous. 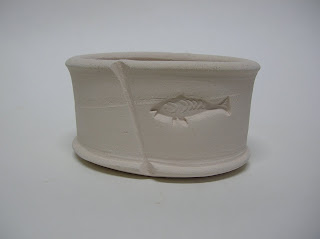 He could see that I had struggled with the knobs on the covered jars - the curled one he felt was OK - though it looked like it was just dropped on the lid - it suited the pot. 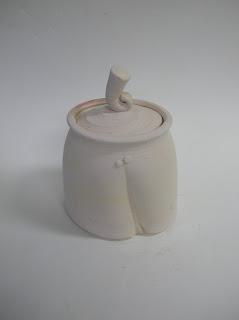 The others looked like I was trying too hard. He suggested that I look at some of the work that Nick Joerling does - as he has fantastic knobs. Also the lugs on the pots - looked just stuck on - did not meld with the pot - so need to work on getting those lugs looking more like they are part of the pot. 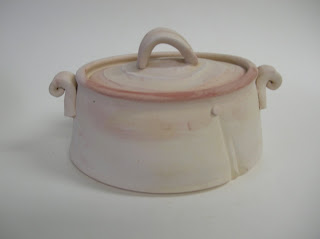 The teapots - yes I think I heard him sigh- and yes I also realize that they need a lot of work. The best one was the flat bottomed one - but he felt all knobs were too tall, and spouts just a tad too big. So much so trying to make them "manly". (I have a commission for a teapot for a friend's brother). Also he felt that in order for the spout to pour smoothly it is important for it to taper and not flare at the end which I have been doing as I really like that look. 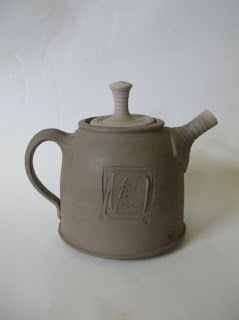 So back to work - will work on knobs, teapots and continue with my fishing lady theme.
Posted by Newfoundout Potter at 7:49 PM