I discussed the October firing with Steven as I felt we had rather muddy overall results - I felt that we had had too much reduction. Steven mentioned that he felt that the best reduction results were when the reduction was controlled by the damper. You get less physical signs of reduction but get a more even result in the kiln. If by the gas, then you usually get lots of flames up the chimney. Even minute changes in the setting of the damper and gas can make a huge difference.
I seem to be carrying through with the applique theme with my other pots - though will try some of the stony yellow glaze instead of the Hannah ochre ash. The Hannah ash gives me blistering sometime.
Regarding the teapots - Steven still felt the end was not tapered enough - opening on spout was still a bit too big. As well the squared bottom teapot - the spout addition - the corner was too jarring - did not blend in well. So will work on my spouts and other aspects of the teapot.
The bashed teapot he felt had possibilities - liked the knob which I do as well - I may try some more though I don't think they will sell here. But it was fun to make.
The fish bowls - the circular finger marks were too predictable - acceptable but the uniformity did not go well with the looseness of the rim. Anyway another good session - keeps me enthused and focused a lot more than I was before as I was getting rather discouraged what with the bad glaze results and I felt at a dead end with regards to creativity.
We had our November firing on Thursday - this time the results were even muddier. In the slow cool (from around 1900F to 1500F) for the first half hour the kiln was accidentally in reduction - maybe that muddied the glazes? The fishing lady pot had the blue ash almost an olive colour and the ochre lacked the rich orange brown where thin. 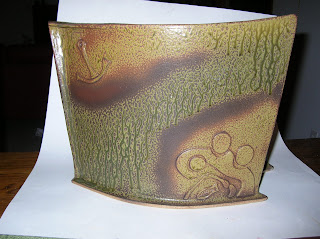 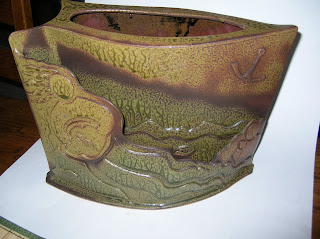 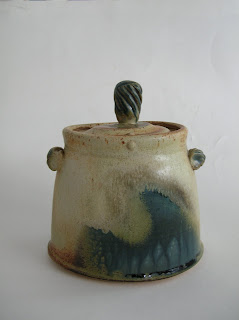 The fish bowl was not too bad, but the second fish bowl had a lot of blistering on the underside edge - even with the Stoney Yellow. It was on the front bottom shelf and I will try refiring it to see if I can get rid of the blisters. Again could have been due to the reduction during the slow cool. I have been trying to extend the bisque firing or bisqueing twice to see if that reduces the blisters by eliminating all gases from carbon burnout. 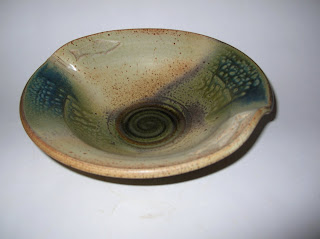 On Sat and Sunday our Guild had a workshop by Robert Tetu, a functional potter from southern Ontario. He demonstrated his economical methods of making his pots as time is money when you are trying to earn a living as a potter. Every movement counts - e.g. using a sponge (which he already has in his hand) instead of having to pick up a shammy and using it. Everybody is now anxious to try his faceting techniques.
Posted by Newfoundout Potter at 10:20 PM