After my last session I realized that I wasn't always putting form first - I was getting carried away with the decorating, the handles and all the other "gimmicks" that I like - in fact thinking up new "gimmicks" is something that I really have fun with. Fortunately they don't all get used on my pots.

So looking back over the decades I think that almost every single pot that I have ever made has always been decorated in some way before it is glazed - and in a few others I have used the glazes to make a decorative design. Yet I love pots that are simple, undecorated and have a well designed form. Why can't I make those?

We did our March gas firing on Tuesday. We tried some Malcolm Davis Shino in this last firing - but again did not get any carbon trapping. Just could not get the kiln into heavy reduction at 012. 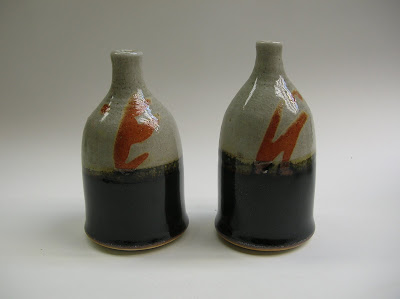 However did get a orange and light grey on some test bottles - orange for the waxed areas - so that might be a start in the right direction. The bottom half of the bottles is a temmoku. 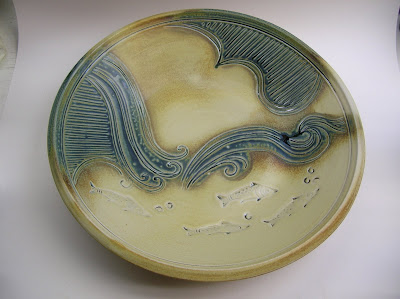 My porcelain plates with the stony yellows - did not turn out that great - one slumped though it is hard to see in the pic. I trimmed it too thin on one side - I guess it just dried unevenly beofre I got around to trimming it. I rather like the diagonal lines, though both areas should have had the lines going in the same direction. I may do more of them on plates.

The other I had glazed too thickly with the stony yellow so the water blue underneath is not vivid enough. 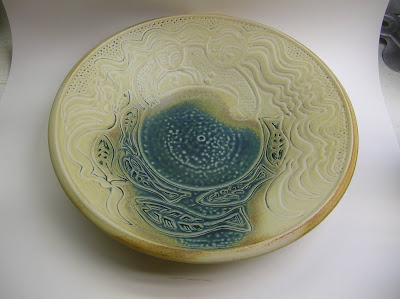 I think also I could have had more layering of other glazes - such as Hannah ochre and Blue as the yellow area is rather boring. They still all look sprayed - somehow I will have to develop more transition areas when I switch from one color to another.
Posted by Newfoundout Potter at 9:11 PM