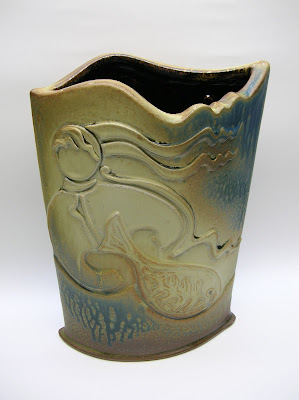 This week was the last firing for my journey and the kiln opening was on Wednesday. I thought that I finally had a winner in the fishing lady pot - the appliques were simplified (no applique where I will have runny blue ash!), the glaze all the right thickness and in the right spots. However a few hours after unloading I examined the pot more closely and saw that there was shivering on the rim! The replacement blueberry pot which did not have good glazing again - however had no shivering.

What had happened I think was that I had sprayed white and blue slips on the greenware pot to brighten the colours a bit on the stoneware clay. However once bisqued, I realized that I had too much blue (I had been tying to tone down the blue - so what was I thinking spraying on blue slip?)and so resprayed again with a thin layer of the white slip. I had used the slips on bisque ware before with no problem, but I think the second time the slip did not stick as well to the bisqued slip layer and so there was some shivering on the rim. However I had used Tuckers Smoothstone which has a lower expansion than their other clays so that could have had an effect. 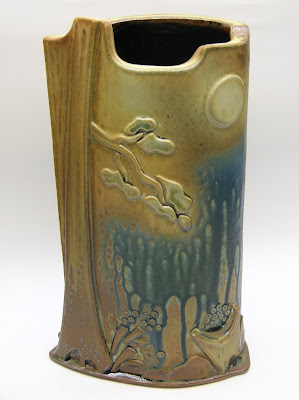 The blueberry picker which had the same treatment with slips still has not shivered -and it was out of Smoothstone as well. So not sure what is going one. As I was in a rush to get this pot finished I did not applique on a person - just the blueberry bucket. I think maybe it leaves more to the imagination this way- still have the spilled blueberries and shoe on the back. 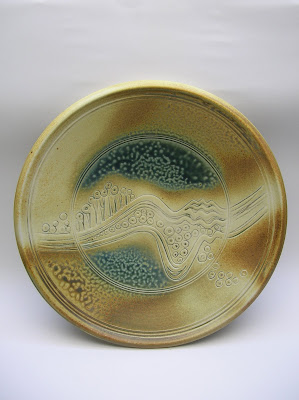 The landscape plate - I finally got some of the Hannah Ochre ash to run - this complements the runny blue ash . The problem has been that if there is any Stony Yellow present under the Hannah Ochre it stops the rivulets from forming. When I spray I try to get intermingling around the different glazes and so the Stony Yellow tends gets under it. This plate was the one that turned out the best - unfortunately it had cracked on the foot.

I spent yesterday trying to figure out how I will pack the pots - I will carry on the plates, put one of the fishing lady vases into a computer bag. Then I found a hard sided suitcase that was being thrown out by the second hand store next to our Potters Guild and it will hold 2 largish cardboard boxes. My soft sided suitcase will hold another two cardboard boxes. By surrounding the boxes with bubble wrap and clothes I should end up with the double box effect necessary for safe transport. I do have a direct flight to Chicago so that should minimize baggage handling.
Posted by Newfoundout Potter at 7:35 PM