Although it was two months later than planned, I finally managed to get in my second woodfiring at the end of August in my train kiln. I had made a few changes - added an inner row of hard brick on the top on the pot chamber, used two hard brick slabs - 12 x 24 x 2 1/2 for the first part of the kiln roof,- all of that adding extra mass.
I also used extra insulating bricks on the lid - as well as an old kiln lid that was 4 inches of insulating brick, as well as a fibre blanket and some old fibre sections wrapped in aluminum foil. I also tried to use soaps where ever possible and added extra bits of shelves, bricks, etc in the stacking to also add mass - all of these to slow down the heat loss - not only between stokes but for cooling as well.


Cone 11 was flat near the top in the first stoke hole and cone 9 starting on the floor near the flue exit. This was much better than the first firing. The firing took 13 1/2 hours and then two hours to burn down the coals before clamming up. All in all very manageable for one person to fire. Unfortunately the clay boat holding cone 012 exploded, resulting in shards in many bowls. 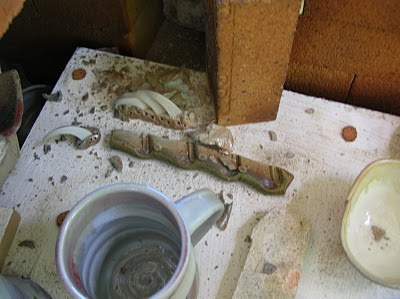 I also used about 1/2 pine and cedar instead of just ironwood which in my first firing had caused too many coals to build up.
This time I glazed most of the pots except for some in the last two stoke sections where I added soda. I placed some small dishes with soda ash when stacking as well as soda/sawdust burritos- the burritos did not work very well as there was still a lot of soda ash left on the floor of the kiln. Some of the dishes boiled over with soda. I also sprayed in some soda.
I did some side stoking - just in the last three stoke holes - maybe a total of a large armful of sticks. Next time i will try no side stoking as that tends sto knock over pots.


Next firing I plan to add more mass to the side walls of the pot chamber especially in the front - maybe that will even out the heat from front to back even more.
Posted by Newfoundout Potter at 1:16 PM