Well I had 5 weeks to ponder, to make and to fire my pieces for the October meeting. The whole meeting was sort of like Christmas morning with the opening of presents - each participant took their turn unwrapping and presenting their pots - it was so exciting as I couldn't wait to see what they had come up with! My fellow journey women all came up with brilliant ideas! I was totally blown away by some of the creativity - wish I had thought of some of those things!

There are several  themes that I decided to pursue. First I decided to continue with the stone fence theme from our farm. The huge fences remain as evidence of an earlier age when hard work was the norm. The fences are made from glacial granite boulders and as there were few flat stones building these fences was not easy. I often look at those carefully placed stones and imagine how the calloused hands of the farmer were the last ones to touch those stones over 100 years ago. 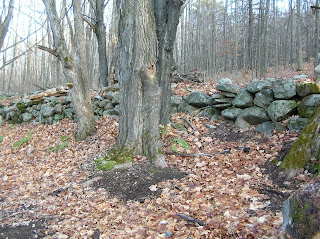 I thought I might start the stone fence and then turn it into a pot and then  turned it back into the fence again. However that prototype turned out rather ungainly and so I abandoned it, though I will think about it some more. I decided to do what I had done previously, the fence coming from just one side - so not very original but I think right now it is to get as many things out there and see where they will lead. I find the forest on our farm very magical - mysterious at times and full of spirits of the past as many areas of what once were fields have now returned back to the forest, with only overgrown stone fences cutting straight lines through the trees. It is certainly easy to breathe the air there - it is pure and cleansing. So I keep coming back to stone fences and trees. Some suggestions from the meeting were to extend the vase - add wings to make it bigger. That reminded me that I had really gotten into a rut with these slab vases - all basically the same shape. So will have to work on that.
So the second theme was to be based on a book that I had read - The Bottom Billion - about how a billion people today live in conditions that existed during the 12th century. I have been thinking of doing something with that idea for quite some time. I made a sketch but what developed was very different again from what I had sketched - it ended up sort of like forest spirits. Keith's comment was that it had lots of movement - with which I agree - however the overall idea that it projects is not very clear - certainly not people in need nor forest spirits.


The third theme that I decided to follow came from Keith's comment on some of my applique work - that I could carry it further and the pot would actually become the figure. Again I had made sketches of people pots but surprise, surprise - again diverged greatly from the sketch. It ended up a bottle that became a woman singing - it was done with slabs and when joined it was pushed out to round it out and to create the fullness of the body.

The last theme that I thought I would try to work on was some sort of connection to the nuclear industry. Deep River is the company town for Atomic Energy of Canada's Chalk River Labs - sort of the Los Alamos of Canada. Our town welcome sign says - Home to Canada's Atomic Pioneers.  Nuclear energy is something that I am familiar with as I worked for over twenty years in Public Affairs at Chalk River giving tours of the reactors. This theme will be hard one - as there is a lot of negative connotation to the nuclear theme - but of course that is not what I want to convey. This will require some serious thinking on my part - will need lots of alpha waves for this as I am totally in the dark on how I should start. As a result I did not do any pots for this one, but put in lots of thinking and research on ideas and  images on the web.
So next meeting on Nov 24 - so will really have to think, sketch, plan and work to pull something further from those themes.
Posted by Newfoundout Potter at 9:17 AM