Well this week had to glaze stuff for the Friday firing. I had my stamped mugs - those I used VCAA green and a clear on the inside. They turned out OK - in fact several have already sold. 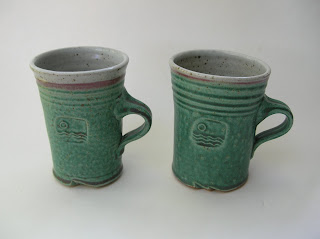 I did a few more in the blue version of the VCAA but I put on the glaze too thick and they turned out a very strong blue black - not nice at all. However all the handles ended up a loose one finger handle - maybe need to make them either a tad smaller or bigger (for two fingers). 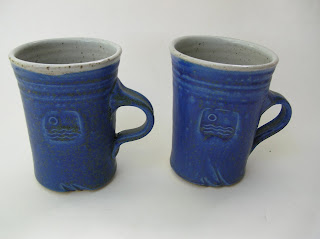 With the two large stamped plates - one I used a rutile blue which shows up texture well and the other a temmoku center , ringed with hannah ochre ash. Both turned out a disaster - no rutile blue - just a grey- brown, though the texture was OK and then my temmoku was too thick so the fish disappeared.
I decided to do the fake ash glazes on the figured pots. The landscape one used iron saturate on the bottom, wiping it off the high appliques. Then I sprayed with the blue ash and Ochre Ash and some more blue ash in the upper right hand corner. 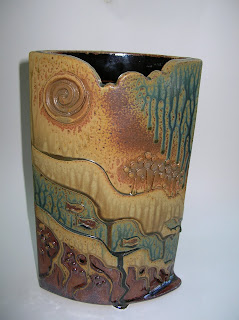 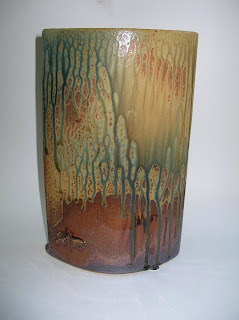 With the women pots I just used the two ash glazes, wiping off the blue from the high points at the bottom. I think that I also did a light overspray with rutile/gerstley borate in some sections like the sun and the trees. However I mostly had too thick an application on all these pots - the backs turned out better as I did not put on such a thick layer - so ran and pooled a bit too much especially on the chins - like a beard. will have to see if I can grind those down - perhaps do a little sandblasting as well next time I visit my brother in Montreal. Well I will have to be more careful on the spraying to get more exacting results. 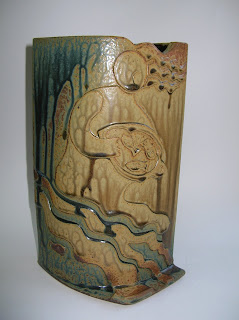 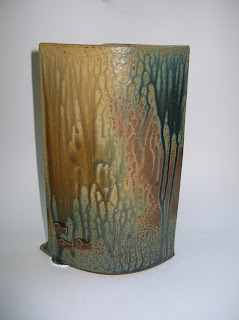 I am not sure if in the end if I like the ash glazes on these pots better than
the Rhodes 32. There is another glaze that I am thinking of using - that's the VCAA base - but should do a line blend to see what colours I can develop - the VCAA green and blue are both too strong and vibrant I think for these pots. I have the the tan version - but it is a bit dark. 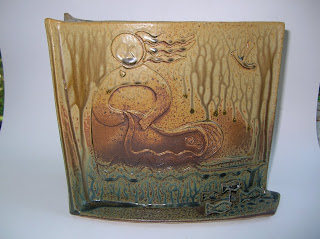 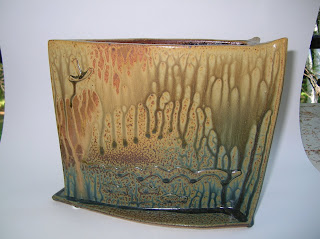 I tried a variation of the landscape on a large plate - but used a wax batik method to apply the iron underglaze decoration and then used a semitransparent that is supposed to be good for iron reds. Unfortunately it is quite shiny - so do not really like the result - though the iron came through beautifully. So perhaps will try to work on that glaze to develop a matte version. 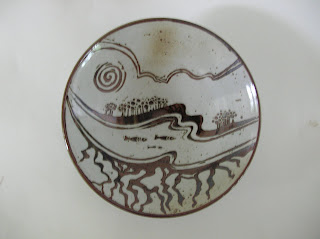 Posted by Newfoundout Potter at 8:13 AM