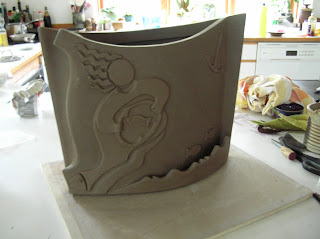 Well after the rather disastrous firing last week (had lots of other small pots in the kiln - temmoku over celadon with wax resist (again too thick a temmoku). Also I was trying to get some nice red-gold spots on the temmoku by overspraying some rutile, iron combination. One combo from a recent clayart post recommended some clay in the wash so that it would not get dissolved - but it ended up rather dry. The best seems to be rutile / gerstley borate in 1:2 ratio which seemed to produce gold streaks.
I made another boat/fishing woman - this time much bigger. I think that I made the slabs too thick as it is very heavy. I also wanted to incorporate the curves of the woman into one back edge of the boat - to make it more interesting. Took quite a bit to time to get the edge to look right - ended up filling the upper left corner with lots of hair.
Not sure if my message of small fisherwoman vs factory ships comes across. My visiting daughter and her boyfriend both thought that it had something to do with the sea - a mermaid, perhaps the woman protecting fish - but the idea a a big factory ship did not come across at all. So will work on that. I do like one back edge having a curve. Also like the waves in front - again the diorama theme. 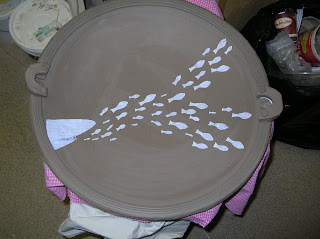 I have wanted to make some large plates so thought I would slump a large slab over the top of a garbage can. I tied and taped an old sheet over the top of the can and then used another thin cloth to transfer the slab that had been precut into a circle into the top of the can. It slumped beautifully. I extruded a wide rim and penciled in grooves using a ruler. Once it had stiffened up a bit I attached it to the plate/ I tried some fish paper cutouts - with shark etc. Then I threw a foot and which later attached once they were all stiff enough. In the end I decided no fish, but put on some slab handles. With the nest plate I think I will try some stamping on the slab before slumping and so that way they would tie in to my other work. 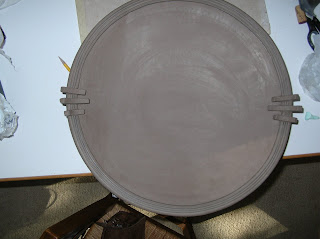 This week with visitors and it being the annual cleanup at the Guild - I really had little time for making pots.
Posted by Newfoundout Potter at 8:15 AM