Well got off to a flying start Monday as I made slabs for two more slab vases - as I want to continue working on them. However stalled after that as had to glaze slab vases that I had made pre-Stephen Hill as we were loading the gas kiln on Tuesday. Our daughter's boy friend Ken, was arriving in the afternoon, to drop off their dog. We'll be looking after their dog until they have finished moving to Toronto from Victoria in September.

Loaded the kiln on Tuesday and fired on Wednesday. It was the smoothest firing that we had done so far - needed very little adjustment of gas, air, damper after body reduction. I decided to reox the kiln after cone 9 was down as that was something Stephen said he did for the last hour from 9 to 10. Also did a bit of a slow cool from 04 for about an hour and a half. 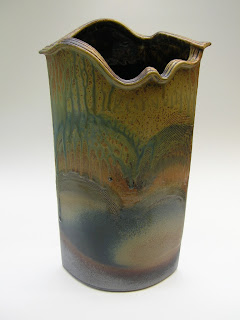 I have been having a lot of trouble with blistering with fake ash glazes on my iron stoneware, even after a slow bisque. Opening the kiln on Friday - the results were really great - great copper reds and hardly any blistering on the fake ash. We'll try to repeat again in the next firing. Managed to put together the slabs and so have 2 vases ready for decorating. 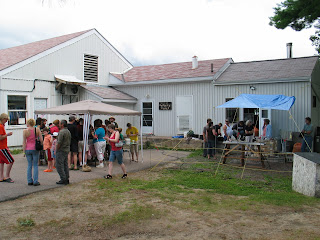 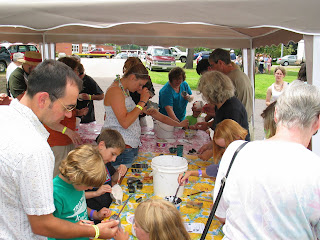 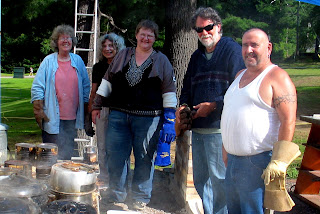 Thurs - Friday had to help get things ready for our big Raku firing for our Summerfest on Saturday. This is held in Deep River every second year, with music, crafts, etc. The Guild makes small pots for the public to glaze and raku. This is very popular - we sold out of pots (152)and so raised approx $1200. The pots are sold at $8, but if people had a Summerfest wristband (cost $20 that allowed them to see all the music events), they got a $4 discount on the pot and the Summerfest committee then makes up the difference to us.

We were a pretty tired out, smoky crew at end at 5 pm.
We also had a pottery sale and sold about $900.
Posted by Newfoundout Potter at 8:07 AM